Five Major Things All Meetings Can Do Without

We've all been there. A meeting that was doomed from the off. Whether it was the poor planning that got you all into a room together, or the fact that nothing useful actually came out from the meeting.

Not only could this result in wasted time (time you could be using elsewhere), it could also mean your goals aren’t being met. 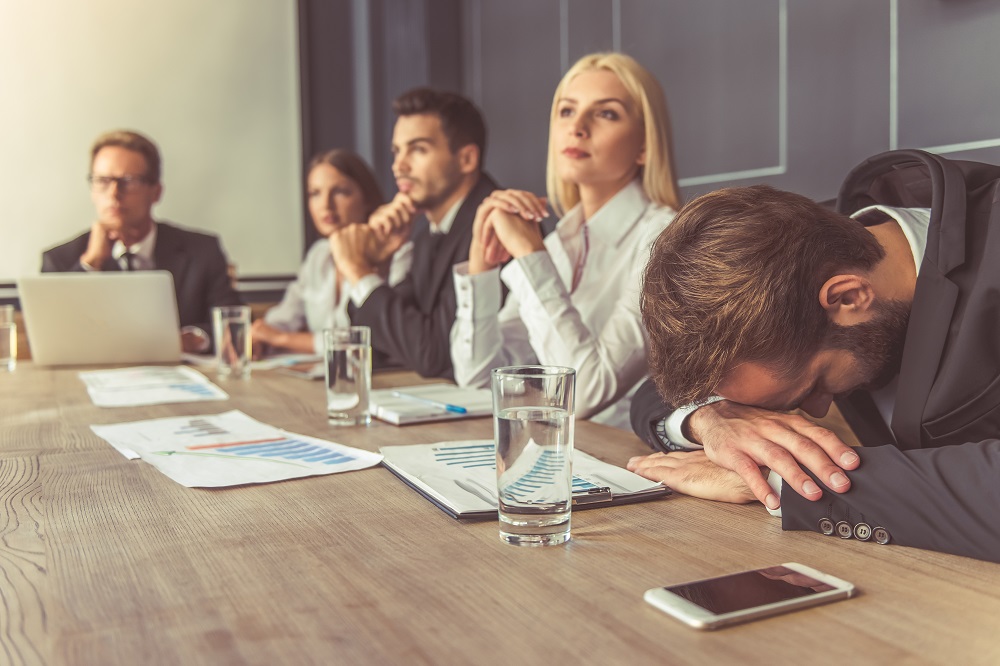 But not to fear, Communicate Better has you covered on all the things you should steer away from to guarantee a productive conference...

OK, so Sharon from Accounts keeps using your mug and you can’t let it go. You’re also pretty sure she’s drinking your squash. In fact, it’s definitely her. You saw her just last week drinking blackcurrant juice and where else would she get that?

We get it. You and Sharon; not BFFs. But a meeting is not the time or the place to be acting on your office feuds.

Although it can seem tempting to go off topic in a meeting, it’s never going to be the most productive use of your time – it’s only likely to make the whole room feel uncomfortable.

Instead, stay focused on the agenda, and encourage the rest of the team to do the same.

Because even if you’re not the one veering off topic, all it takes is one person to distract the whole group.

More often than not, meetings are held to address problems and conjure up a solution.

They are NOT a time to create more problems.

A poor attitude while you're sitting across from someone you don't particularly care for, may push you all further away from the end goal. Ultimately, everyone suffers.

So before you resort to defeat or put others’ ideas down, think about how you and your team can work together to make things better.

Not only could your optimism encourage others to adopt the same approach, it’ll also paint you in a good light as a strong-minded professional.

Let’s face it, everyone can get a bit click-happy when it comes to meeting invites.

This means that not only could you end up with a group of people far too big to actually be productive, you could also be wasting people’s (or your own) time. After all, it’s unlikely that everyone will even get a word in.

So if you feel like you won’t be adding any value (and you could make better use of your time), there’s probably no harm in politely declining an invite – especially if the meeting already has a large number of attendees. And the same goes if you’re the one in charge of sending invites.

That way, the group will be more likely to stick to the agenda, everyone involved will have a reason to be there, and there’ll be less chance of people getting bored.

You can always catch up on notes afterwards.

A meeting has one purpose; and unfortunately, that doesn’t usually involve checking social media, answering emails, catching up on sleep, and working on an unrelated piece of work all at the same time.

So if you tend to walk in armed with the contents of your desk, you’re probably not allowing yourself to focus effectively. How can you when you’re simultaneously filling out a spreadsheet?

Even if you look up from your phone/laptop/notebook occasionally, it’s doubtful that you’ll have any idea what’s going on. So stop getting distracted, and go hands-free.

Not only will you be more likely to have a productive meeting, you’ll also avoid coming across rude to the rest of your team.

A group of people don’t always agree with each other – meaning meetings are potential danger zones for petty arguments, defensive comebacks, or undermining comments.

Unfortunately, the people involved won’t even know they’re being unprofessional until another member of the team calls them out on their behaviour. This means that a conscious effort to remain calm, fair, and proficient is essential.

But how? Firstly, think before you comment on a team member’s idea or statement. Negative reactions like ‘I hate that idea’ or ‘that won’t work’ will only cause them to be defensive, not to mention discourage them from making any further suggestions.

Secondly, avoid pulling rank or being condescending with a colleague. Even if you’re technically more qualified than them, that doesn’t mean your opinion is always right.

And if you really need to discuss further? Take it outside (of the meeting). You can always revisit the topic under better circumstances.